Larry kept exercising on the cold floor to keep himself awake. It had been three days since he’d used his prayer beads. He could not let himself fall asleep. He didn’t want another dream- he might find out that he’d been hurting someone. Hurting someone so badly that his hands were covered in blood. The morning finally came.

After breakfast, he rushed through washing the dishes and ran until he was in the garden. The only place where he could find peace.  Larry was about to discover there was no peace to be found today. He was handling each tomato plant gently- trying to find the daily, perfect tomato he had been leaving outside the Abbot’s door each day. It was the end of the season; he couldn’t find any tomatoes at all that hadn’t been blown to the ground and destroyed in last night’s rainstorm.

I found one! It’s perfect!!

Larry knew he was tired, so he was being extra gentle as he pulled the tomato from its stalk. He smiled down at it, grateful that he had one last gift for the Abbot. He put the tomato into his pocket so that he couldn’t drop it as he did the rest of his work.

The monks were humble and turned any gifts they received into the Abbot to give to the poor. But, Larry’s small gifts of food were accepted for what they were, gestures of brotherhood. Larry was so tired yesterday, that he had left a tool on the ground rather than putting it back in his satchel. Now, as he worked his way down the row, it happened. 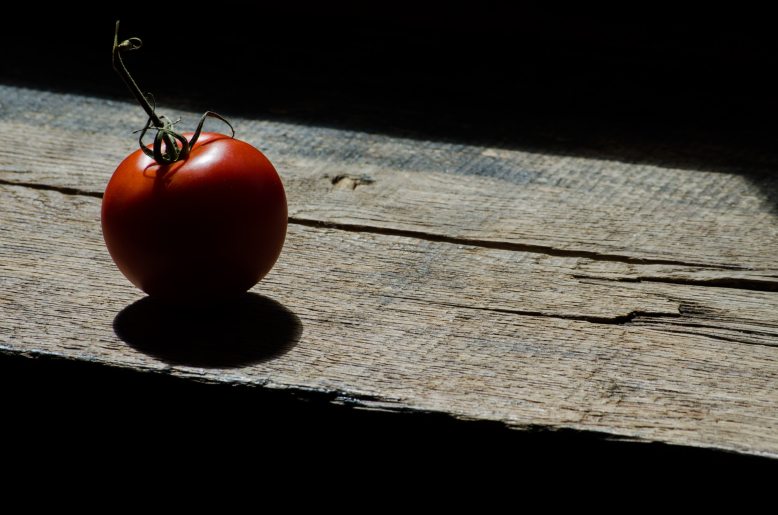 Larry tripped over the trowel and slammed hard into the ground – crushing the tomato. It hurt to land on the hard ground. Yet, Larry was instantly asleep. He was back in the dark room with the one flashbulb. He was hearing a belt whipping down through the air. He felt scorching pain on his back. He heard the sound again but before it hit, he had already started screaming.

“Wake up brother, it’s me, Ted. Wake up brother.” Larry’s eyes opened and he saw the kind blue eyes of Ted looking down at him in concern. Larry was still feeling too stunned to say anything. However, when Ted reached his hand down, Larry accepted his help to stand up. Larry felt a trickle of blood on his forehead from where it had hit the floor.

“Thanks, I’m sorry to have disturbed you.” Ted waited for Larry to wipe the blood off his face. When he didn’t, Ted handed him a tissue. Larry looked down at it dazed. “Larry, did you hurt your head?” Larry realized his head was hurting. He took the tissue and wiped the dripping blood. His head didn’t hurt anywhere as bad as his back had during the beating. Could Ted see blood dripping down his back? No, Ted was just staring into his face.

Of course, Ted can’t see the marks on my back. There aren’t any marks. It was just a dream.

Larry was trying hard not to stare at his body looking for signs of the beating he felt he’d experienced. He didn’t want Ted to think he was acting crazy. The dream had felt so real, it hurt so bad. He could remember the sensation of warm blood running down his back. It was his blood. This time he was sure it was his blood.

It was his blood. What a relief!

Ted was watching the emotions change across Larry’s face, from pain, to confused, to cagy. He was sure now that Larry was experiencing some type of posttraumatic reaction. The look on Larry’s face just looked so familiar to him from the self- help group he was in with other veterans experiencing war trauma. He wanted to bring Larry to the group. He knew he had scared Larry off before. He didn’t want to be too pressured this time. He was searching for the right thing to say.

“Larry, that look on your face right now is so familiar to me. I see that look on so many guys’ faces in this self-help group I go to on Wednesday night. Would you go with me tomorrow?” Larry didn’t know what to say. He didn’t want to go but he didn’t want to act suspiciously. It would be worse to be thought crazy then to get bored at some group. Ted looked worried. Ted went to the group…..

I don’t know what to say to Ted. Should I go?

Ted attends a group run by the Veterans Administration for men who’ve been deployed and developed posttraumatic stress disorder. Larry is not a veteran, but he doesn’t know this. He has experienced a childhood and adolescent full of traumatic experiences. As an adult, he caused traumatic experiences for Claire and Davy.

But he doesn’t remember any of this.

Is it a good or bad idea for him to go with Ted?