Another week without a single letter! What is going on! Are those Carsons preventing my Claire from writing me!! Is it that therapist’s fault!!!!

Larry kept rocketing back and forth between scorching rage and bitter loneliness.  He had been waiting for three weeks and still no new letter from Claire. He had been forced join the pathetic other guys in his reading group who had nothing to offer but re-reading old letters. Those other men, the ones with the new letters- were obviously laughing at him behind his back. After the group had dispersed towards the cafeteria, rain began pouring down. Everyone started pushing towards the door into the cafeteria.

Larry was almost inside when somehow the whole group got shoved backwards.  A mass of them fell backward and Larry’s head hit the cement floor hard. It had hurt like hell; it couldn’t have been an accident. He put crooked his arm around the throat of the guy who had fallen on top of him and began to choke him hard. That was the last thing he remembered until two guards were out in the rain man- handling him; other members of Larry’s gang added their punches to the mix. The guy who shoved Larry was sent to the infirmary. Larry was shoved into a solitary confinement cell. He just lay on the floor in his soaking wet clothes lost to the here-and-now.

If Claire drops me, I will have no one. They could leave me in here for life. No one would care. I would be lost forever. 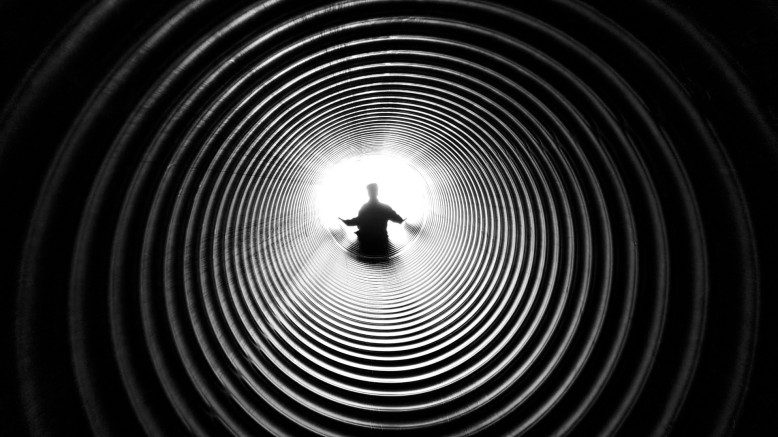 Larry had fallen all the way down the black tunnel in his mind. It had appeared suddenly, when he was little. Something terrible had happened. He didn’t remember what. But somehow, he just knew that he was safe, if he stayed at the bottom of the tunnel and just looked up at the world. If he tried to climb out of the tunnel alone, -pain, pain beyond description would result. If he wasn’t alone, if Claire was there, he could climb out of the tunnel. He could shove her behind him, jump on her and get a bounce so that he could grab the rim and pull himself out; this was his easiest road out- he felt so strong as he pulled himself over the rim. The harder route was for him to slowly edge his way up the tunnel, pulling her carefully behind him so he didn’t lose his balance and fall back in. Sometimes, if he was careful enough, he could get them both out, gasping for breath but out of the tunnel.

Sitting at the bottom of the blackness, he kept searching for answers in the last letter he had received from her. Claire had mentioned starting therapy. That was plain stupid to begin with, Claire wasn’t crazy and didn’t need to see some stupid shrink to tell her that. Claire said the Carsons wanted Claire to talk about her nightmares. Those were just none of their business Larry thought, with his fists clenching and unclenching in fury. Of course, Claire had bad dreams. Of course, she screamed in her sleep sometimes. Everyone did, Claire was as normal as he was and didn’t need to talk to some idiot who would mess around with her head.

Larry knew all about Claire’s dreams. he was the only one Claire had ever shared them with. He had the power to stop her shakes just but holding her tight and stroking her hair.  This was just further evidence that they were fated for each other. Claire was his and he was hers; no matter what that stupid judge had thought.

Larry had shared all his nightmares with Claire’s but not his most horrifying one. This one he had kept down deep inside.  In it he was little and was making mud pies in the backyard – covered in filth, alone, but smiling. Suddenly he was being ranked forward onto his belly and a strong hand was pulling down his pants while another hand was holding the back of his neck down against the mud. He could barely breathe; mud was oozing into his nose. This mouth hurt for smashing down hard on a rock. He was being hurt, terribly hurt, something hard was ripping his behind open. He couldn’t scream.

A roar of voices- his father and uncle Fred were running out of the house; they pulled the hands away that had been holding Davy still.  He rolled over groaning in the mud and saw his dad and uncle Jim punching their neighbor over and over until he stopped fighting back. Then they carried him to the door of his trailer, threw him in, and then followed. It seemed to take just an instant and Davy saw them come running out of the trailer and slam the door. As they made a grab for Davy, he heard his uncle Jim say, “it’s burning really good now.”  Uncle Fred saw Larry was listening and slapped him hard, “you didn’t see a thing, hear me!” Larry nodded. He was carried into the house and shoved into bed. No one ever talked about what happened. No one ever talked about the burned- out shell next door.

If his dad ever caught him staring where the trailer had once been his dad would say, “don’t say I never done anything for you.”

Larry and Claire do share many adverse experiences in common. They have been both the victims and perpetrators of violence against others. There is no one profile of the abused child. If you want to be able to recognize the many different warning signs that a child around you has been traumatized go to The National Child Traumatic Stress Network (NCTSN) and read The 12 Core Concepts: Concepts for Understanding Traumatic Stress Responses in Children and Families: https://www.nctsn.org/