They feel so smooth. They are so small. How can they help me?

It’s time to go to sleep. Larry is feeling terrified alone in the dark. He is holding his gift from the Abbott. He is trying to count them and pray, for the strength to do one good thing with each bead. He stuck on bead number 3. He prayed for the strength to stop avoiding Ted: that was his first prayer, Ted had been such a good friend to him he deserves better than what he was getting.

Larry had been slowly leaving the monastery building to head for the garden, but only checking to make sure he passed through the open area without Ted seeing him. It was wrong. He knew it. But what if Ted asked him questions again? It might help him understand his nightmares. But, what if it made them worse.

The second bead was to pray for the sun and water the garden needed to flourish. Larry had noticed how much more cheerfully the monk seemed to go about their daily work sense the quality of their food had gone up. He never mentioned it, because he knew he should be humble, but it did make them feel better that he was paying back from all of their kindness by helping them be fed well.

He couldn’t get the words out for bead number 3; he fell asleep. 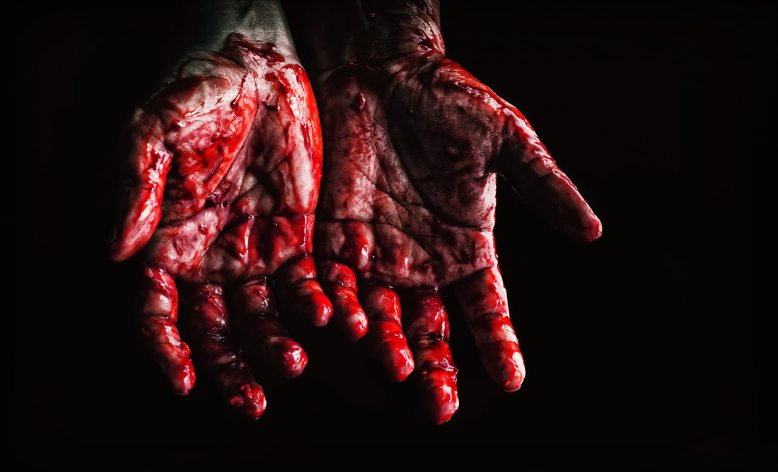 His mouth was frozen again in silence. But his eyes…. his vision was full of these blood hands. Whose hands, were they? What was the blood from? Whose blood was it? He began to hear a male voice …counting. “How many do you deserve? I will make the first one here. I will make the second cut…” Larry woke up terrified. He fell off his bunk. He heard something sharp hit the floor with a clash.

No. “Please don’t be broken. Please.” Larry was whispering to himself as he searched the floor with his hands. In growing desperation, he reached further and further until…he had it; the rosary seemed intact. Whimpering on the floor he began his counting. “The first bead is for the strength to bear God’s judgement. The second is for the courage to know whose blood is on my hands…My hands.”

Suddenly Larry knew, the memory was of his own bloody hands. But, had he been hurt, or had he hurt someone else? Larry whispered, “the 3rd bead is to pray that it is my blood and I have not hurt someone else.”

Larry has hurt so many people in the past. Starting at a young age he had beaten his younger siblings. Now, he is praying that he never hurt anyone else.

Do you believe that someone as violent as Larry can change? Do you think his memory loss is just masking the violent man he really is?

Researchers and doctors seek answers to these questions. The following quote is from Claude Munday, Ph.D., William Lynch, Ph.D., and John Haller, from the Traumatic Brain and Spinal Cord Injury Project. “Even a person who makes a “good” recovery may go through some personality changes. Family members must be careful to avoid always comparing the impaired person with the way he/she “used to be.” Personality changes are often an exaggeration of the person’s pre-injury personality, in which personality traits become intensified. Some changes can be quite striking. It may be, for example, that the head injury survivor used to be easygoing, energetic, and thoughtful and now seems easily angered, self-absorbed, and unable to show enthusiasm for anything. Nonetheless, try not to criticize or make fun of the impaired person’s deficits. This is sure to make the person feel frustrated, angry, or embarrassed.”

To read more about the potential impact of brain injury and how to help someone you know go to: