Larry is crouching down next to the driver whose head has fallen against the front wheel of the bus. Talking to him gently, Larry was trying to help the driver regain consciousness. He didn’t smell sour, so it wasn’t a problem with drinking too much. Could it be drugs? Finally, the driver groans. Larry helps him slide out from behind the wheel, a monk has gotten up and takes one side of the man as Larry takes the other and they move him gently over to lie down on the first row of bus seats.

The monk looks up at Larry and says, “We have to get him to the hospital. I don’t know how to drive a bus. Find out if anyone else can.” Larry nodded and slowly went through the bus asking all the monks. No one had ever driven anything with a stick shift- but Larry.  On the farm he had driven tractors and other farm equipment. He had just asked the last monk who was sitting at the back of the bus. Larry looked out the back window- the black car was just sitting there. He had to get this bus moving.

Larry rushed back to the front of the bus, told the monk who seemed to be in charge that while he had never driven a bus, he did have stick shift experience so he would see what he could do. Larry sat in the driver’s seat and looked around carefully. It had a familiar look. He turned back towards the monks and called out, “everyone must get back in their seats and hold on while I try to get the bus back on the road.” With a determined look, Larry shifts into reverse and the bus slowly inches away from the tree.

I did it! Keep your eyes on the road you idiot before you kill them all!

Just for an instant, Larry felt good about himself but then his father’s words came back to him; he looked straight ahead focusing his attention on the bus. Its front end was smashed in from hitting the tree, but the engine was still working, and he had it moving at a fast clip down the road. He was searching for any sign that there was a hospital around. He had left his cell phone back in the church so that the gang couldn’t use it to track him; the monks didn’t carry phones, so the search depended on Larry’s eyes.

Larry was squinting ahead, tired after another two hours driving in the dark worrying that he would take too long and the man would die because of him. The bus had passed some small towns but nothing that had a hospital. Was that a blue hospital sign? “Everyone, I think I saw a hospital sign, Larry said uncertainly. Another monk came to the front, in case he could help. Larry admitted that he wasn’t positive, but he believed there was a sign saying the next exit had a hospital. The monk just said, “thank you for all you are doing. I believe the driver had a heart attack. His life may be saved because of your quick thinking.”

Larry didn’t have time yet to process these words, he was slowing down to take the exit and then looking ahead for further signs of the hospital. There were none.

Am I an idiot! Is this man going to die- how stupid of the town not to put up another sign showing the direction to take to the hospital.

Larry was furious and pounding the front wheel of the bus. He didn’t know if he hated himself or the town more. Why did he care if the man lived or died? But he did. What was that? Suddenly Larry heard a sound. It was a police siren. Larry didn’t know whether to jump off the bus and rush off or try to bluff it out. He looked back at all the monks who were looking silently at him. They were depending on him.

They think I can handle this. They don’t know what a loser I am.

Fatalistically, Larry pulled the bus over to the right side of the road and lowered the front window. “What happened to your bus sir?” Larry was shocked by the “sir”; he was being treated with respect. Looking at the officer he said, “the driver had a heart attack officer and the bus hit a tree. I am just trying to get us to a hospital, but I don’t know how to get there.” “I’ll get you there,” the officer said. He put his police siren on, and his vehicle headed off at a fast clip. Larry followed swiftly behind. Within ten minutes, they were parked in front of the emergency entrance to a hospital.

The officer knew exactly what to do. Within an instant, there were emergency personnel on the bus taking the driver’s vitals. They gave him a shot of something and then put him on a stretcher and rushed him into the building; the monks all followed. 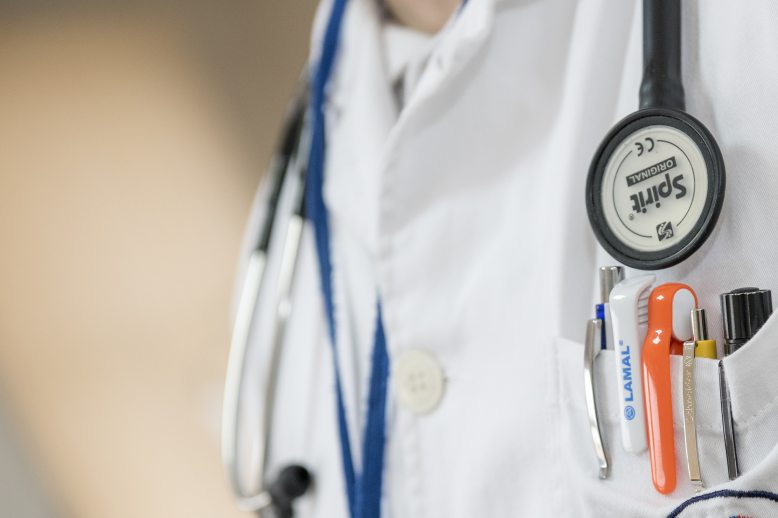 Larry slowly backed the bus out of the way of the emergency room door and parked the van. He sat there for a moment, not knowing what to do.

“Sir, can you follow me please.” It was the police officer. Why did he come back? Was he going to arrest Larry? There was really no choice. The black car was parked near the bus. At least with the police officer, Larry was safe. He followed the police officer into the hospital.  The officer had no idea who Larry was. He just needed Larry’s help! “I need to fill out a report on the accident,” the officer said, looking down as he wrote down the date. “Can you tell me everything you remember about the accident?”

Larry’s life is continuing down an unexpected path. First, the priest began helping him just because he asked for help. Then, the monks risked their own lives by letting him onto their bus. Now, a police officer was treating him as if he counted for something. It took about fifteen minutes but then the police officer thanked him, and Larry was left alone in the hospital waiting room. Larry put his head down in his hands and just wondered where his life was going.

Could exposure to the Monks change Larry for the better? Did the emergency itself change Larry?

Research on emergencies shows that there are three categories of people who may be impact by an emergency. Larry is one of the primary victims or survivors of an emergency as he was in the bus when the accident occurred and continues to be directly involved. The police officers and now the medical personnel are the emergency responders who are trained to handle traumatic events, and the last are the vicarious observers- the other people who know the victims/survivors or the emergency responders or hear about the event. All these individuals could experience a negative or positive impact from their involvement in the event in the short or long term. To read more about emergencies and their psychological impact go to: