Larry had no adult criminal record, so his case had started out simply enough. If nothing else had happened since the assault, Mr. Branister could have gotten the charges dropped, or maybe gotten Larry probation. Unfortunately, Larry had resisted arrest. Mr. Branister believed Larry’s story that he had been drunk when the police knocked on his door and that he had still been able to control himself until one of the officers had insulted him. Larry didn’t seem to understand that these facts would appear differently to the judge than they did to him. The judge was going to think he must have a serious alcohol problem that he had been drunk at 10 in the morning. This was not the only issue making Larry’s case more serious.  Since being in jail, rather than waiting “calmly” for his case to be called, Larry had been written up three times for getting into fights during the last two weeks. This was going to make it appear to the judge that Larry has a pattern of interpersonal violence that included both men and women. If things didn’t go just right in court, Larry was facing some serious jail time.

I don’t know what to do tomorrow. How am I supposed to act in court? What is this judge going to do? It seems like that prosecutor is out to get me? How am I going to protect myself?

These thoughts kept Larry from getting much of any sleep. Attorney Branister had told him all the things not to do. But, what was he supposed to do? He couldn’t believe he was supposed to just sit there and shut up. Only suckers did that. Should he trust Branister? All of these guys who seemed to have more control than him, the judge, the prosecutor,and  this Branister  were all so different than Larry. Could  they ever understand what was really going on between Claire and him?

It started out as planned. Larry came in and sat down next to Mr. Branister who reminded him again that he should stay completely quiet unless addressed by the judge or an attorney.  He told Larry to trust him, to handle anything that happened and to especially not make any effort to talk to Claire or any other witnesses. Larry hated being told what to do, it made him feel like a puppet. But he felt very out-of-place in the court room. He was in his jail jump suit, his lawyer and the prosecutor were in black suits. In fact, besides looking alike, they exchanged friendly hellos as if they knew each other. He didn’t get this setup at all.  Larry wondered again if he Mr. Branister would sell him out.

Larry was staying in his seat with his mouth shut but he kept twisting around trying to get a good look at Claire. He knew she loved him. He figured with one good look in her eyes, she would back down and drop the assault charges. That might have worked, but Larry never got the chance. Claire was there but she was flanked by her foster parents and Ms. Hysock from Child Protective Services and he could not get a direct look in her face. There were also three other strangers who came in and talked to the prosecutor briefly before the judge started the hearing.

Who are all these people? One woman looked vaguely familiar… Oh yeah, he remembered with a groan, it was the crazy waitress from the diner. She might have seen him hit Claire. Would she admit the truth? That Claire had asked for it?

Larry tried to ask his attorney a question but got hushed. . . the all-mighty judge was walking in.  Larry had expected that the hearing would start right away but the judge was just sitting there reading papers. To Larry, it looked like the judge was reading as slowly as possible to make the point that he was 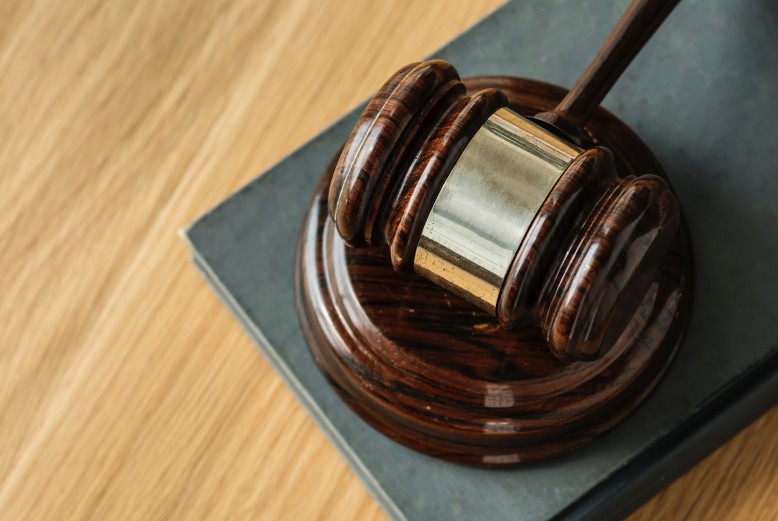 important, and Larry was not. As his stress rose, Larry’s legs begin to bounce and they accidentally bumped the table. Attorney Branister whispered to him to stop it. The judge hears this and looks up, “You want to make a statement Mr. Branister?”

The judge’s tone, which Larry read as sarcastic, made him instantly furious. He didn’t know court always proceeded like this. He felt the judge was jerking him around because he had a public defender instead of a real, fancy attorney like the ones who helped the rich guys he had seen on TV. What was the problem that Larry wanted to move his legs a little? His legs were going numb from all this waiting.

Attorney Branister knew that everything was proceeding normally and before responding to the judge, tried to convey that Larry needed to just stay put and let him handle everything by raising his eyebrows and motioning downward with his hands. He then jumped to his feet and said, “No judge, I am sorry to have disturbed your review judge.”

Larry felt the rules in this court room were intended to make him feel totally controlled and put down.  Larry heard a very different message in his head from the one his attorney had intended to send.  Larry heard, “already you are screwing things up, stop it or I’m done with you.”

The judge had finished reading about Larry’s past criminal record. He noted that Larry had no previous adult charges and his juvenile record contained no violence, just truancy and drunk driving. The judge was relieved that he wouldn’t have to hold Larry over longer in jail because it was already over-crowded. He turned a page and reached the part of the complaint that Claire had signed, he looked at the picture the police officers had taken of her face. He then read the signed statements the police officers had taken at the diner from a waitress and two patrons who had been witnesses to the assault. Things were looking worse, but probation rather than jail might still be on the table. Then, the judge got to the arrest documents and saw that Larry had attacked a police officer and gotten into several fights in jail while awaiting trial; this whole case was looking much more serious.

The judge looked up at the Public Defender, “Mr. Branister, how does your client plead?”

Larry was covered in sweat. His stomach was tied up in knots.  His hands were numb from sitting on them to prevent pounding on the table. Would Branister sell him down the river?

Branister stood up and said, “Not guilty your honor.”

Larry could breathe again. His attorney was fighting for his rights.